Rituals and Revels: Everyday Life in Tudor and Stuart England

Home/Death, Event/Rituals and Revels: Everyday Life in Tudor and Stuart England
Previous Next

Rituals and Revels: Everyday Life in Tudor and Stuart England

‘What a fantastic idea. Bringing history to life by being site specific. A great mix of facts, drama and entertainment’

On Thursday 7th March I hosted a public engagement event at the oldest building in Exeter, St Nicholas Priory. Founded in 1087 as a Benedictine monastery, the priory was dissolved by Henry VIII in 1536, and was eventually converted into an Elizabethan townhouse. From 1575 to 1602, the priory was occupied by the Hursts, a prominent merchant family. The building is currently owned by Exeter City Council, and is used as a museum, furnished as the house of the Hurst family.

I was the organiser of an event titled Rituals and Revels, which was an interactive historical tour about life and death in Tudor and Stuart England. Members of the public were invited to step into the world of an early modern household, with postgraduates from the University of Exeter Centre for Early Modern Studies and undergraduates from the University of Exeter Shakespeare Society. Visitors were guided through the priory by undergraduate actors representing the Hurst family, and these actors explained the history of the family and the building as part of the tour. Postgraduates were stationed in each room of the priory, where they presented short talks on their research. Immersive characters were also stationed in the rooms, in order to demonstrate aspects of the talks.

I was the first postgraduate speaker, and my presentation was located in the Cellar. This is the oldest part of the priory, and it still features the original Norman pillars and vaulting. It also contains an anonymous stone sarcophagus, so it was the ideal setting for my talk on memento mori and death meditation in Tudor England. The aim in this room was to offer a glimpse at the experiences of the original inhabitants of the priory, immediately before the Dissolution, and so the atmosphere was enhanced with Gregorian chants, candles and censers.

My talk was based on A Dayly Exercyse and Experyence of Dethe (1534), which was composed by the Bridgettine monk Richard Whitford. A Dayly Exercyse is a guide to death preparation, published in the context of increasing state violence and religious persecution under Henry VIII. Whitford’s goal was to strengthen resolve amongst opponents of the king, and I argued that death meditation could be used as a type of peaceful resistance against tyranny. I was accompanied in the Cellar by a costumed interpreter – a nun – who performed several death meditations for the audience.

Moving on with the tour, visitors learned about early modern reading practices and parish libraries from my co-organiser, Anna-Lujz Gilbert, in the Tudor Parlour. The next stop on the tour was the Tudor Kitchen, where visitors heard about women’s working lives from Imogene Dudley. Sarah-Jayne Ainsworth discussed wealthy women’s wills in the Bedchamber, where she was joined by a scribe and a widow on her deathbed. At the end of the tour, the Hurst family invited visitors to join their evening’s entertainment: a banquet (wine and nibbles) and a performance of the Pyramus and Thisbe play-within-a-play from A Midsummer Night’s Dream.

Rituals and Revels was a great success. It was attended by visitors of all ages and backgrounds, including families with children, students, retirees, historical societies and other Exeter locals. All of the feedback was extremely positive, and visitors were especially happy to see the university students engaging with the local area and history. We have already been asked to host future public engagement events at St Nicholas Priory and at other locations, so watch this space! 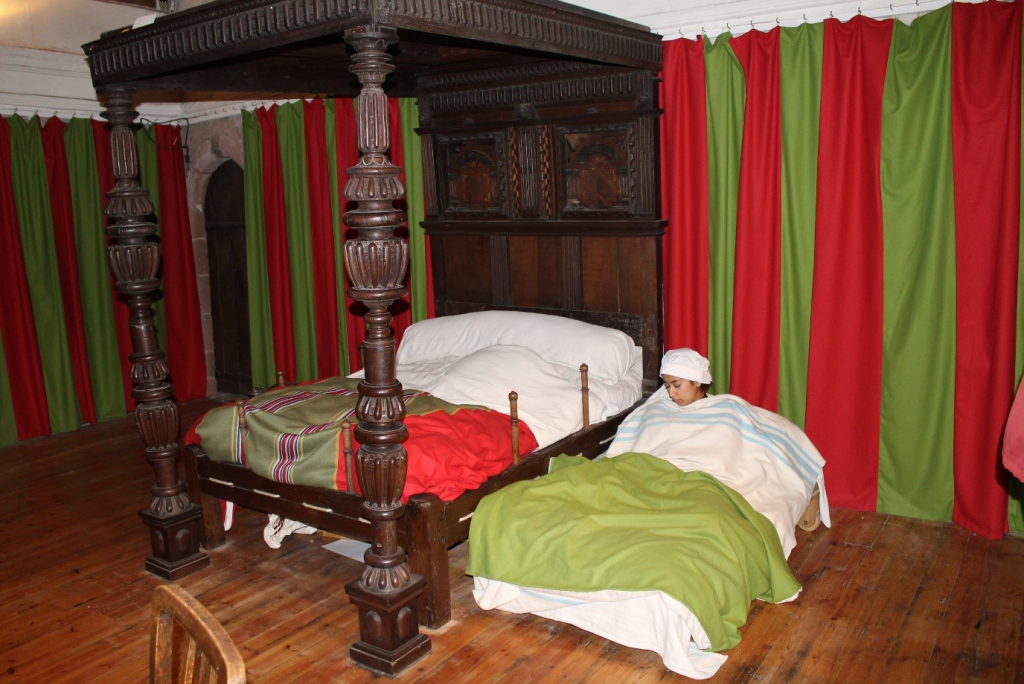 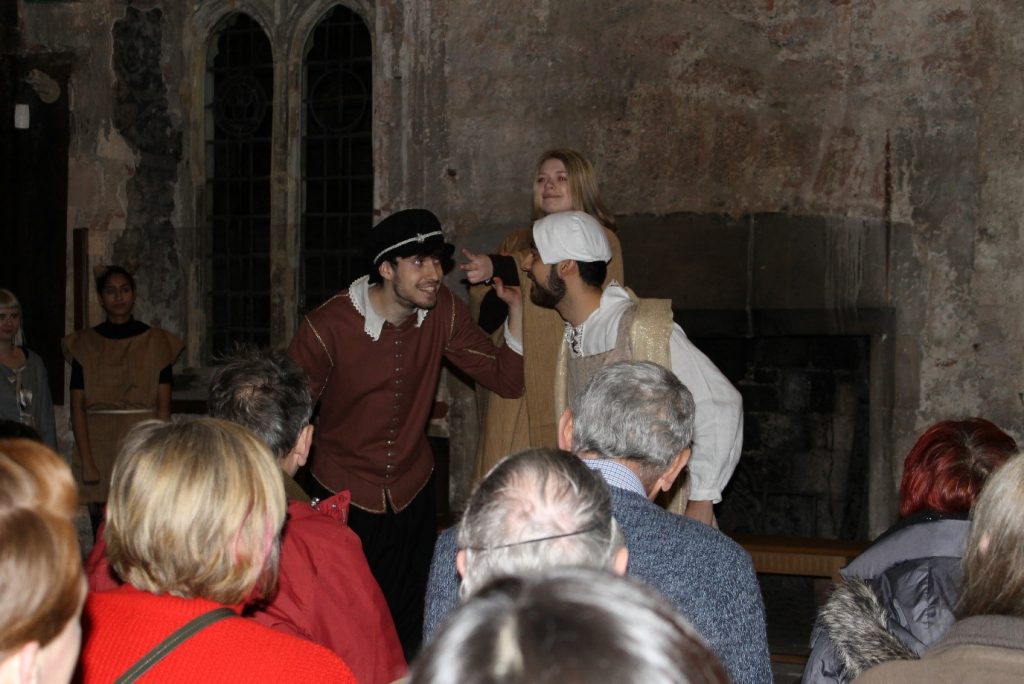