Two Cheers for Iconoclasm: Why Pulling Down Monuments Gives Us More To Remember

Home/Memorial, Memory, Politics, Uncategorized/Two Cheers for Iconoclasm: Why Pulling Down Monuments Gives Us More To Remember
Previous Next

Two Cheers for Iconoclasm: Why Pulling Down Monuments Gives Us More To Remember

The statue of the merchant and slave-trader Edward Colston has been pulled from its plinth in Bristol. In Oxford there are renewed calls for the image of Cecil Rhodes to come down. Across the southern United States, monuments to Confederate soldiers and politicians seem to be falling in greater numbers every day, some by order of local government, others at the hands of protesters. Alarmed conservative politicians complain that ‘history’ itself is under attack; opponents counter that the monuments in question both falsified history and perpetuated oppression. 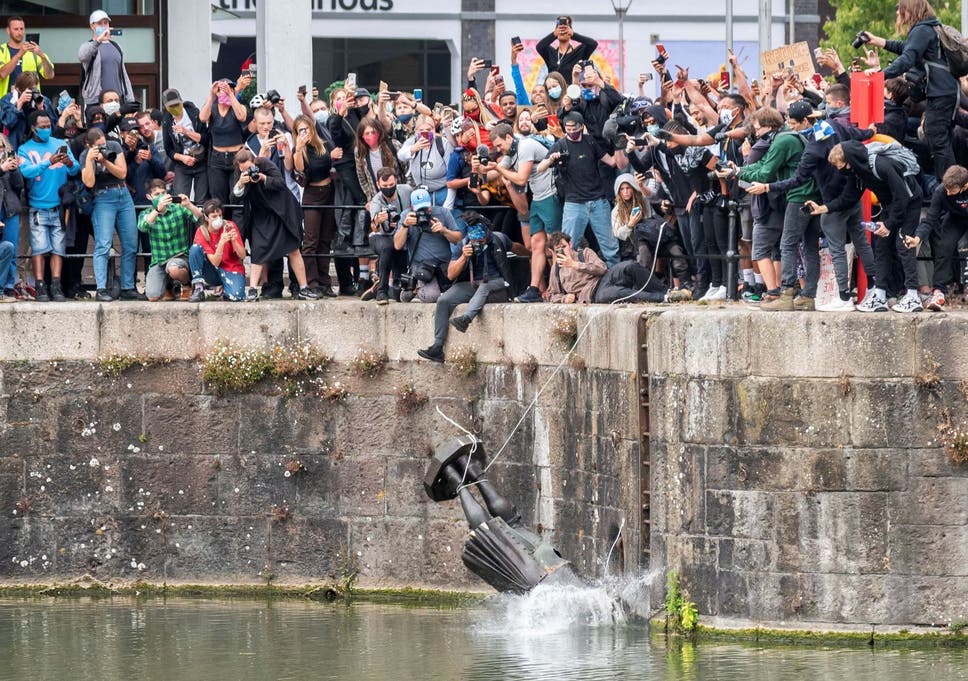 To interpret these attacks on monuments and memorials as attacks on historical memory is, at best, a gross over-simplification. Many recent incidents of iconoclasm, from Bristol to Birmingham, Alabama, are better understood as acts of counter-memorialization, designed not to erase history but to inflect and complicate how it is remembered. Although some scholars decry iconoclasm as the fruit of dangerous “primitive instincts” – a view echoed by Home Secretary Priti Patel, denouncing the toppling of the Colston statue as sheer disorder and “mob rule” – image-breaking can be viewed as an organized cultural activity with an aesthetic tradition and ritual order of its own. Interpreting recent events in the light of the history of iconoclasm – particularly in the era of the English Reformation – can help us understand their significance.

In the 1530s and 1540s, as the Reformation took hold, numerous injunctions were issued calling for images in churches and cathedrals to be “pulled down.” The phrase has a figurative as well as a literal force. In the pulling down of statues, Reformation reformers saw a re-enactment of the fall of the idol of Dagon in the presence of the Ark of the Covenant: “behold, Dagon was fallen upon his face to the earth before the ark of the Lord.” (1 Samuel 5.3) In more recent eras, the pulling down of statues continues to serve as an emblem or promise of radical political change – think of the iconic fall of Saddam Hussein’s statue in Baghdad in 2003, or that of Stalin in Budapest in 1956. While the biblical phrase “how the mighty are fallen” is often applied metaphorically, the physical fall of a monument literalises the metaphor.

The sudden toppling of the statue of Edward Colston undoubtedly created a more powerful visual impact than its slow and methodical removal by a crane would have done. Bristol poet Vanessa Kisuule has written of the event as if it were a dance performance before an admiring crowd:

The righteous wrench of two ropes in a grand plié.

Briefly, you flew, corkscrewed, then met the ground

With the clang of toy guns, loose change, chains, a rain of cheers.

Standing ovation on the platform of your neck. 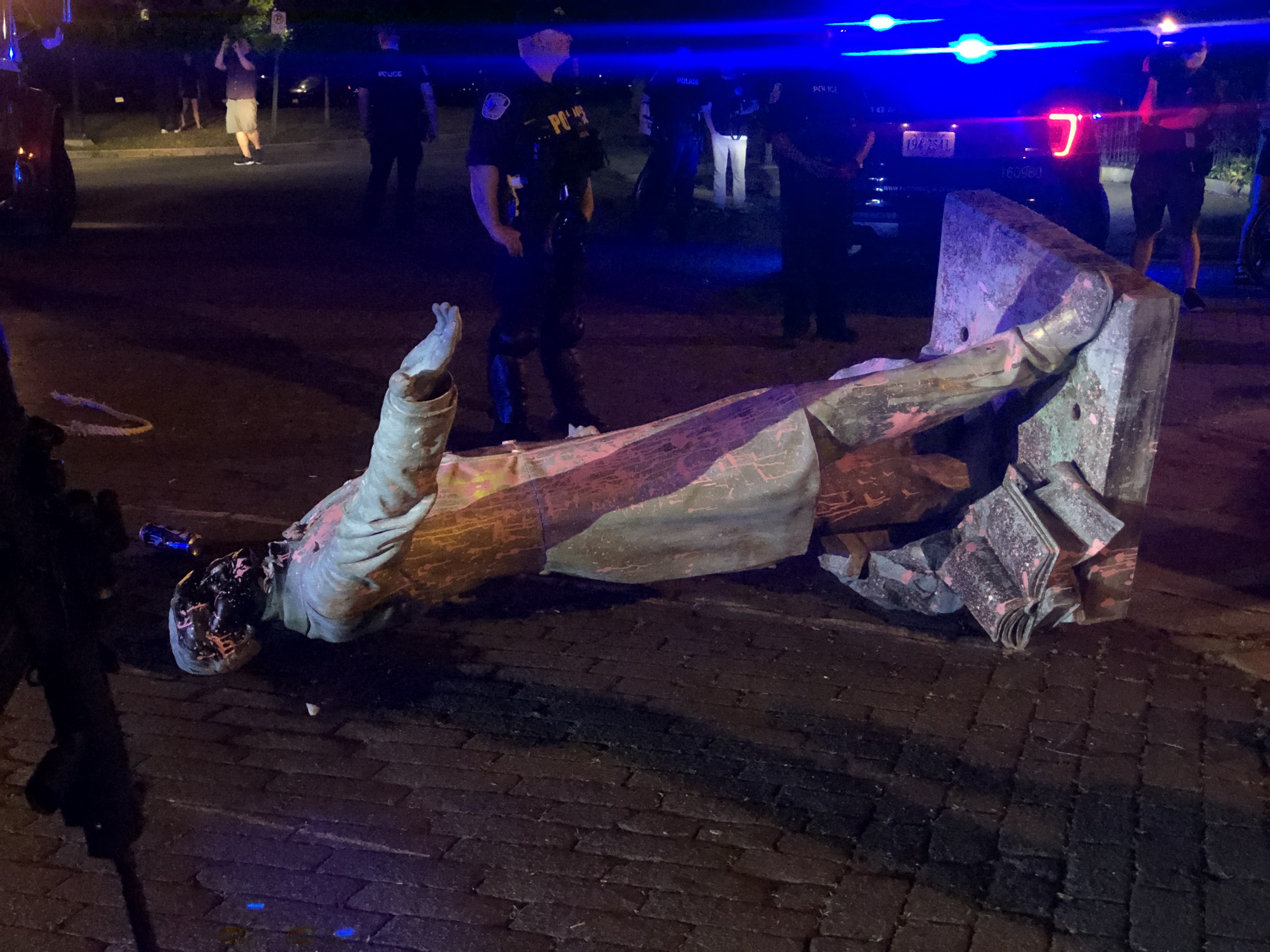 Images of the fallen statue of Confederate President Jefferson Davis in Richmond, Virginia, brought down on the night of the 10th of June, are comparably striking. Seen on the ground, the statue’s arm which previously extended outward in masterful benediction is now stretched upward as if in mute appeal, forming an image of surrender. The sculpture is largely undamaged, but its meaning utterly transformed.

Both in the sixteenth century and today, the removal of statues has often been accompanied by acts of ritualized humiliation and performative punishment. Reformation iconoclasts might spit on religious icons, daub them with urine or feces, or invite them, ironically, to save themselves. In some cases, religious images that had attracted particular veneration were sent to Smithfield to be burnt in public, mimicking the execution of traitors. Likewise, at Bristol, protesters took turns kneeling upon Colston’s neck, recalling the horrifying death of George Floyd under the knee of a policeman in Minnesota.

In such acts of ritual humiliation, the status of the monument seems to flicker uneasily between dumb matter and a living human body. These moments can be intensely uncomfortable to witness. Yet in the performative unfolding of iconoclasm, such ironic acts serve as a prelude to the real point, the revelation that the object has all along been empty of personhood. In 1538, the renowned Rood of Grace from Boxley Abbey was paraded through the towns of Kent, where the populace was invited to laugh at the mechanisms which had once awakened wonder by making the image of Christ seem to smile and bow. In a similar vein, the fall of Colston’s statue exposed both its symbolic and its literal emptiness. Kisuule concludes her poem with the revelation, “This whole time, you were hollow”.

Iconoclasm, in the sense I have been exploring here, is not an act of sheer destruction or mere erasure. Rather, even in the course of its assault the object, it overlays it with further, complex, and corrective associations and memories. Almost inevitably, iconoclasm produces powerful afterimages: the beheaded saints and angels to be seen even today in so many older churches and cathedrals; empty niches; bare pedestals such as that which supported Edward Colston. In the century after the Reformation defaced statues were often intentionally preserved in their original locations, forming a new and complex spectacle. While some observers may have been roused to pity at the damage to fine works of art, others perceived these broken idols as “monuments of our indignation.”

Paradoxically, the afterimages of iconoclasm seem to demand our attention in a way that the originals very rarely did. Monuments often go unnoticed by passers-by, yet, as the sociologist Michael Taussig has observed, “With defacement, the statue moves from an excess of invisibility to an excess of visibility.” Given the international media attention, it is possible that in the few days since 7 June, more people have seen the fallen statue of Edward Colston than ever saw it over the previous 125 years; it is almost certain that many more people have actually looked at it. Colston’s reputation may have suffered a blow, but his memory is not endangered.

The Bristol artist Banksy has proposed that the slave-trader’s statue should be restored to its plinth, this time with a cable around its neck and accompanied by bronze statues of protesters, shown in the act of pulling it down. “Everyone happy. A famous day commemorated.” The suggestion is ingenious, and may even be realized, but in an important sense it has already taken place. The empty plinth has already become a multiple memorial, commemorating at once a despicable merchant, a vanished statue, and the righteous anger of the protesters who plucked it down. Iconoclasm of this kind has given us more to remember — more history, in other words – not less.